On Tuesday, 8/21/2007, Duke University and Bon Appetit Food Management Company held a cookout to welcome the freshman that make up the graduating class of 2011. On Monday, August 20 2007, I received an e-mail (thanks Roylee) asking if I was available for hire to capture this event. There were certain key shots that they wanted to get and the rest was left up to me. Over 3000 people attended this gathering. It was agreed that I would work from 3:30 p.m. up until around 6 p.m. just capturing as much of this event as possible. This blog only has a subset of the photos that were taken. However, at the end of this entry is the official link to the pictures that contain all the images that were submitted to Duke. I thank God for opening this door for me.

There was a staircase on the outside a building which was adjacent to the lot. Climbing to the top terrace allowed this view to be captured.

In addition to this photo a really fun version of these two men were captured. Basically, I had them just go with the moment and was able to photographed them just having fun. (You’ll have to visit the full gallery to see it.) 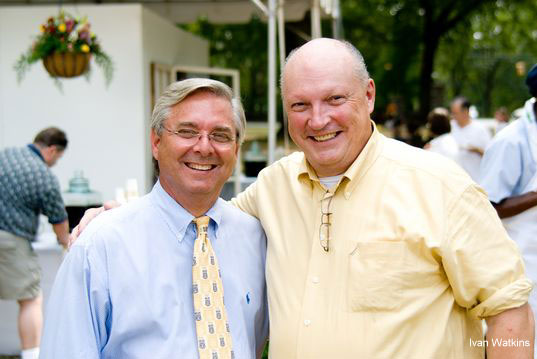 The setting on the East Campus was a cozy, easygoing, tastefully country atomosphere. The hay bales in the picture below not only helped to set the mood but they functioned as carefully placed seats on which visitors could relax. 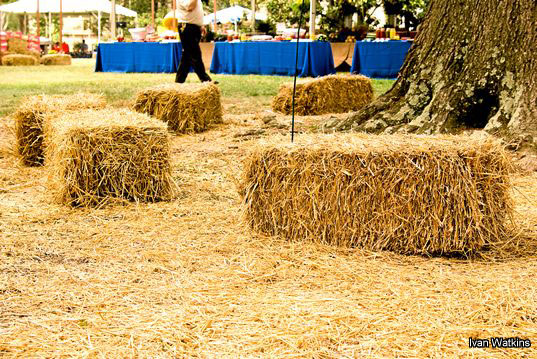 One of the highlights of the cookout was the smoked cow exhibit. Sections from the cow were skillfully carved and served to droves of hungry people. It was provided by “Harris Acres Farm” of Pinetops, NC. 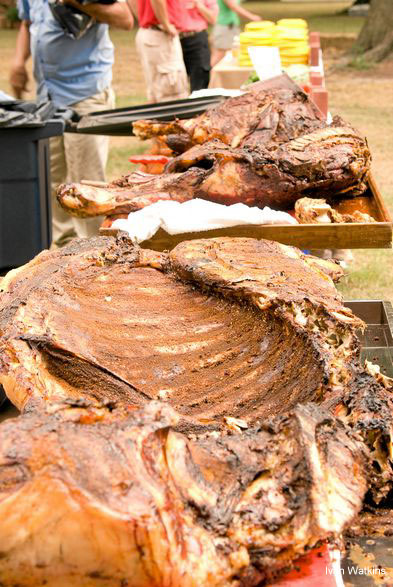 Here are two of the culinary professionals that worked hard behind the scenes to help make the event successful. They worked side by side with about 48 other people and collectively they made the cookout a success. You’ve heard the saying that it takes a village to raise a child .. well it takes a small army of dedicated hardworking staff members to feed 3000 people. 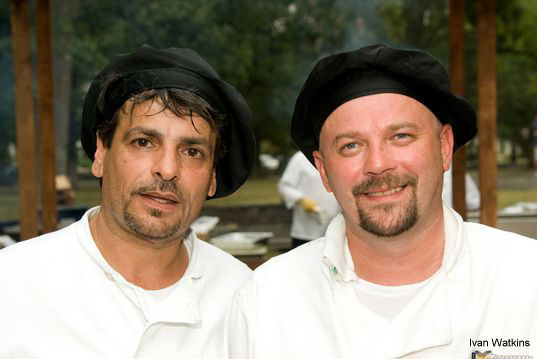 As I walked around the grounds there were many family members enjoying their time on the Duke grounds. This woman and her child were gracious enough to allow me to capture a more intimate photo of the two of them sharing time together. 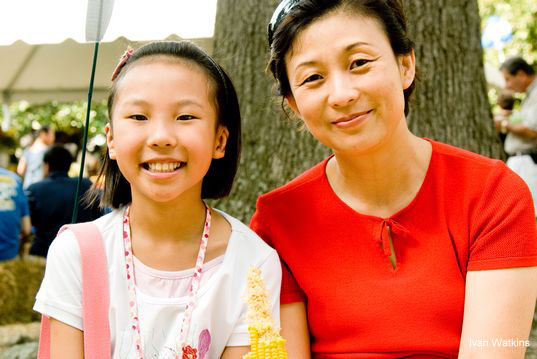 Although the focus of this event was to welcome the Freshman class of 2011 there was another message that Duke was sending. They wanted to show that they take recyling very seriously. There were large garbage cans provided for collecting plasticware, paper, scraps of food as well as silverware. Many people casually walked by each of the cans but inside lay what I call.. creative art. Not just a box of forks… but a masterpiece…. was to behold.

I call this piece “Forktitude” 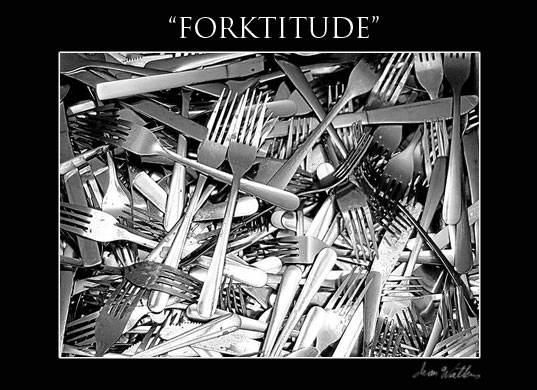 In addition to the smoked cow, the lemonade stands, the roasted corn, the buffet beneath tent . . . . . the “Shady Grove Band” was featured to provide us with live music. Here is a shot of the female member of the band.

(more pictures of the members are provided in the larger gallery) 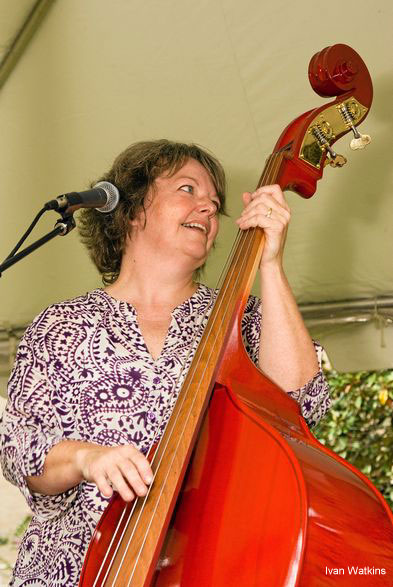 Click on the video below to view the slideshow that I presented to the coordinators of this event.

Of course this blog entry contained a small selection of photos. The entire gallery of photos should be viewed in order to truly experience this outing.

CLICK HERE TO VIEW THE REST OF THE GALLERY

Here is one of several images that was shot within the business look category. One thing that I can say about Leon is that he came well prepared with several changes of clothes. 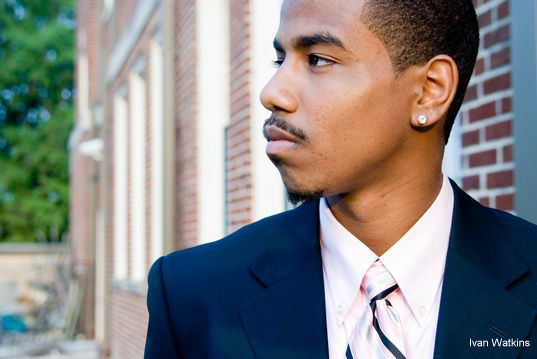 This was one of the shots that just speaks classy. Working with Leon was stress free because he had some of his own ideas as to different styles of shots to try. 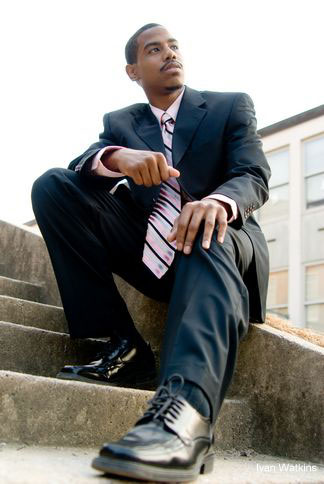 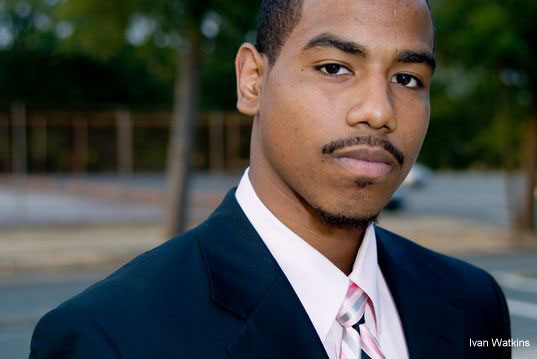 Once we had captured our fair share of images at this location we decided that it was time to get out of the suit and switch to the casual dressed down session. Of course this warranted that we change location. We hopped in the van and rode the downtown area looking for potential sites on which to shoot. For this session we found a location that had several architectural features that we could use.

All of the elements came together for this series of shots.. The sky, the aged brick, the metal walkway as well as an abandoned railroad all helped to create the atmosphere that I was looking for. 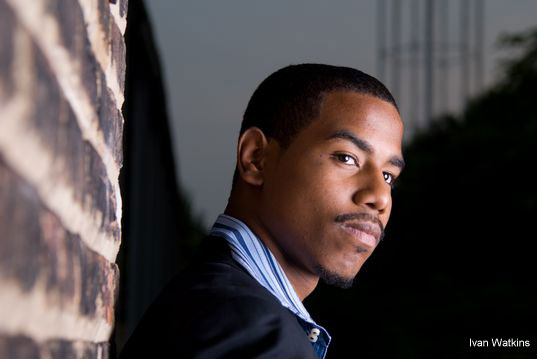 In this shot Leon is just laid back and relaxed while checking out some of the scenery that was beyond my left shoulder. He nailed the pose and it works well with the settings. 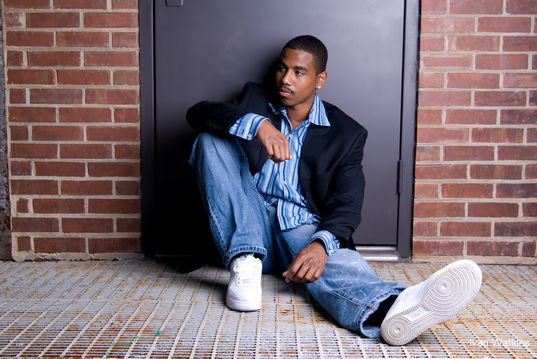 This is one of those classic shots. 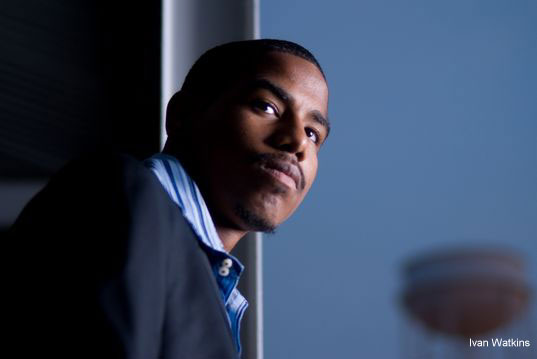 You will probably remember that I mentioned that this particular location had interesting features. One of those features was that on the face of one wall was a single room with yellow lights inside. This caught my attention because Leon was sporting a casual blue shirt. If you know the smallest bit about color theory then you know that blue and yellow/gold work well together. This was some what of a tricky shot to pull off. First we had to measure the amount of light coming from the yellow room as well as the brick wall. If the camera was set to let in too little light then the light on the brick would have been too dark. Once those were figured out then we set the amount of light falling on his shirt to be about twice as bright (1 stop) than the light coming from the room. Here is one of several photos that came from the brain exercise and what I call photography math. 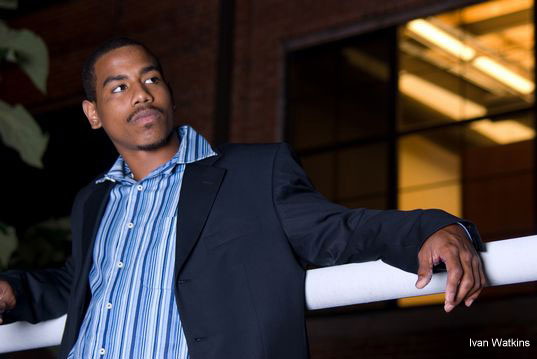 (Just in case you’re wondering) I will share with you why I shared so much detail about the thought process that went into the photograph above. My intent was to educate (some of my family and friends) and to teach them that a good deal of thought goes into taking a photograph. Notice that I didn’t say “picture”. I’ll never forget the time that one of my instructors got offended when I mistakenly messed up and called a portrait a picture (at the time I thought.. well it’s a picture what is the big deal). He then went on to explain that a picture is where you just point the camera and shoot without much thought.. a “snapshot” if you will. A photograph is a carefully crafted image that is created once you’ve analyed and adjusted the light sources, the angle of light that falls on the subject to create the shadows (which affects texure and detail) , the camera angle in relation to the subject, the background, the posing of the subject etc…

Now I have a deeper appreciation and respect for the people that have invested many years of their lives toward learning and becoming masters of this craft.

Enough of that rant.. let’s get back to the subject at hand.

Once we got our fair share of dressed down casual shots then Leon was then ready to take it to the streets. He ditched all the dressy clothes and went completely Urban. We lucked up and found an almost empty parking deck that overlooked the American Tobbacco Courtyard located near the Durham Bulls Baseball Stadium. 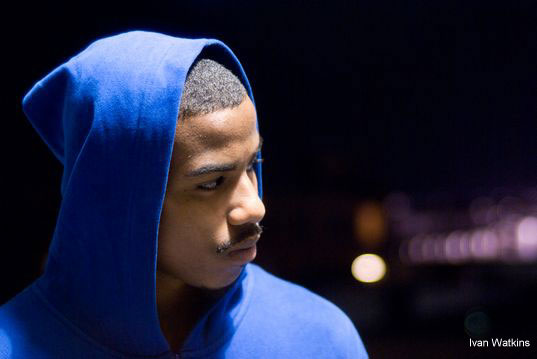 And of course if you’re going to shoot urban.. you have to include at least one shot for the ladies. 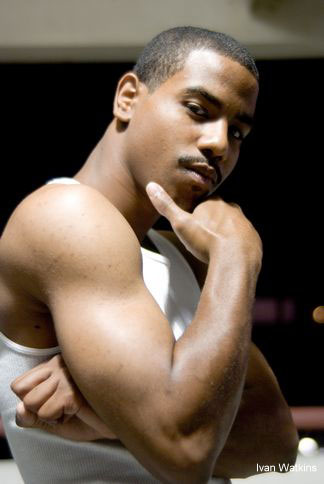 By the time all three sessions were over we were pleased with the images that had been captured. I’m looking forward to my next shoot now.

Believe it or not but BJ’s birthday was April 15, 2007 and I’m just releasing the pictures. He didn’t have a big party like his younger siblings but he had a nice gathering of friends and family.

Here is a picture of he and some of his buddies hoovering around to take a picture. It was next to impossible to get them to form a perfect circle and so I gave up trying and just captured the memory. 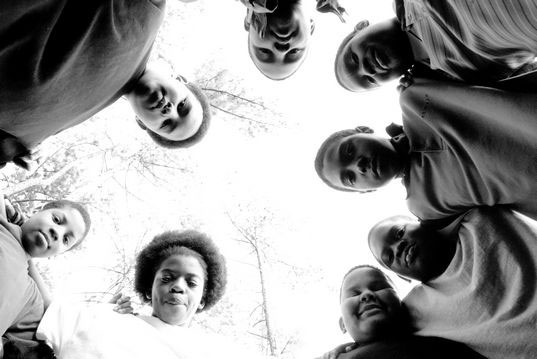 It seems like the thing that they wanted to do most was play video games. In both of these pictures BJ is fixed on the TV set as his friends battle it out with electronic foes. 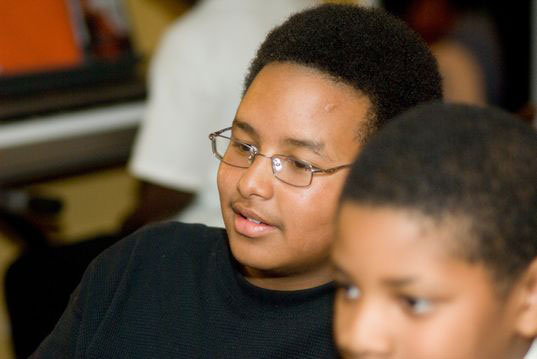 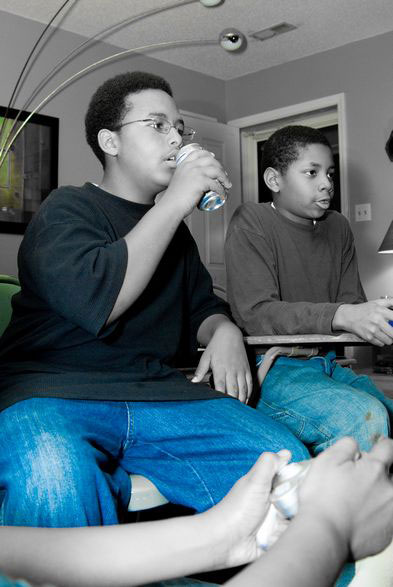 The whole gang is here. In this picture you will see some of BJ’s closest friends. 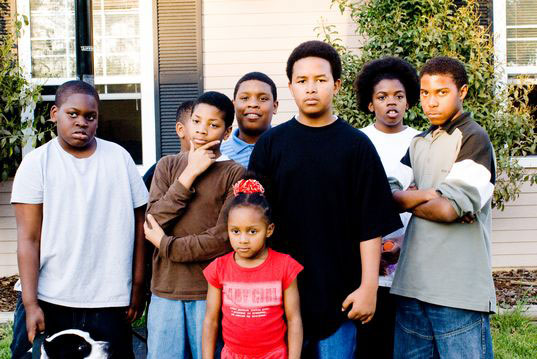 UNLIKE ANY OTHER THING THAT I’VE SEEN AT A PARTY.

It was so bizzare that it was worthy to be called BREAKING NEWS. View the video to see what happened.

CLICK HERE TO VIEW THE REST OF BJ’S PICTURES.

On Saturday, August 4, 2007, the children and I went to Carowinds with our church.Â  Thanks to Minister Delton Farmer, Derrick Cameron and everyone else that was involved to make this trip possible. It was nice being able to get away for a full day’s worth of play.Â  When we arrived at the park Aleah immediately teamed up with her buddy Erica and another little girl named Jordan. 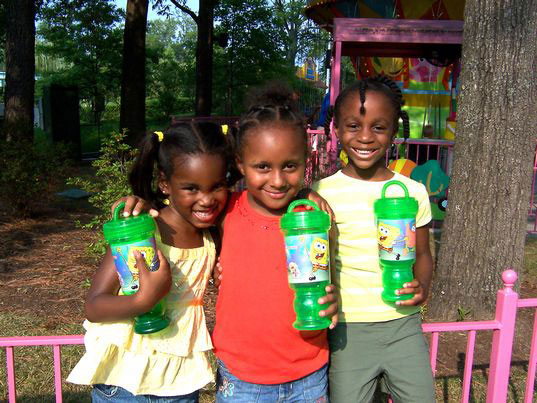 YES!!!!! Was what I thought when Shell (Erica’s Mom)Â said that it would be okay for Aleah to hang with them.Â  This meant that I would be free to ride as many rides as I wanted.Â Â  It was also a chance for me to spend some time with my boys Brent and Christian.

This trip was a major hurdle for Christian.Â  It was the first time that he had the nerve to ride on big rides andÂ the only stipulation was that I had to ride with him. WeÂ rode Â just about every big ride at the park that we could get on without waiting for an insane amount of time in lines.

Â There is one memory in particular that comes to mind…Â  It was when we fixed our eyes on the “Southern Star” which is featured in the picture below.

When we were upside down I was able to take this picture of how it looked to usÂ  while we staredÂ at the ground.

Here is a picture when we weren’t upside down but sideways and you can see the people on the other part of the ride looking up at us.

When we got off the ride Christian said… “Dad, when everyone else was screaming you were sayingÂ  NOW THAT’S A SWEET SHOT!!”

We literally played hard all day long and by the time 7 hours had rolled by.. we were completely spent.Â  However, that didn’t stop the boys from experiencing one last ride.. a children’s ride.Â  I couldn’t believe that they wanted to get on such a simple ride but they did..Â Â Â

Here is that one moment relived…Â

I didn’t take a bunch of pictures during this trip because my main goal was to play and not be consumed with trying to “capture the outing”.Â  So you won’t findÂ my usual number of images.Â  However, if you’d like to see the rest of the snapshots then

CLICK HERE TO VIEW THE REST OF THE GALLERY